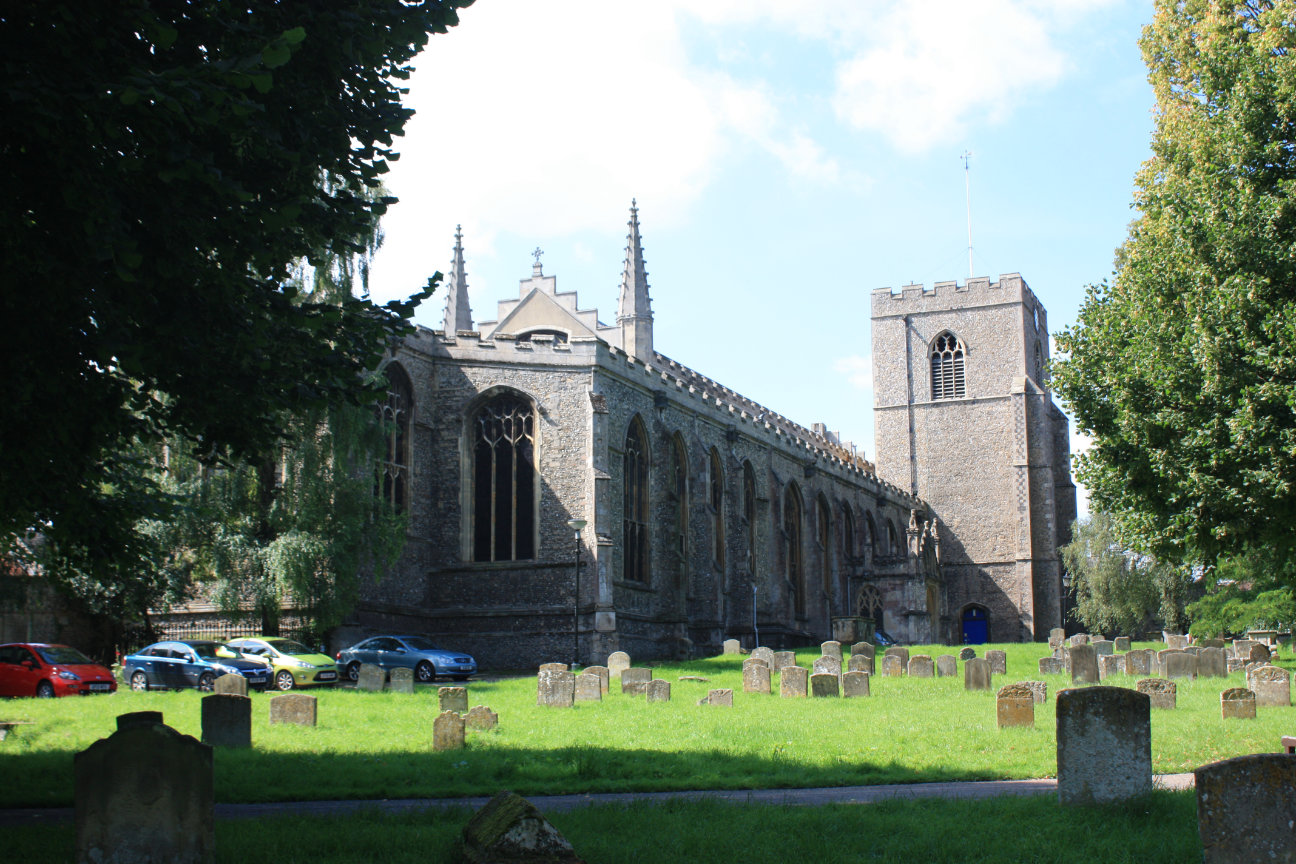 St Mary's Church is the civic church of Bury St Edmunds and is one of the largest parish churches in England. It claims to have the second longest aisle, and the largest West Window of any parish church in the country. It was part of the abbey complex and originally was one of three large churches in the town (the others being St James, now St Edmundsbury Cathedral, and St Margaret's, now gone). 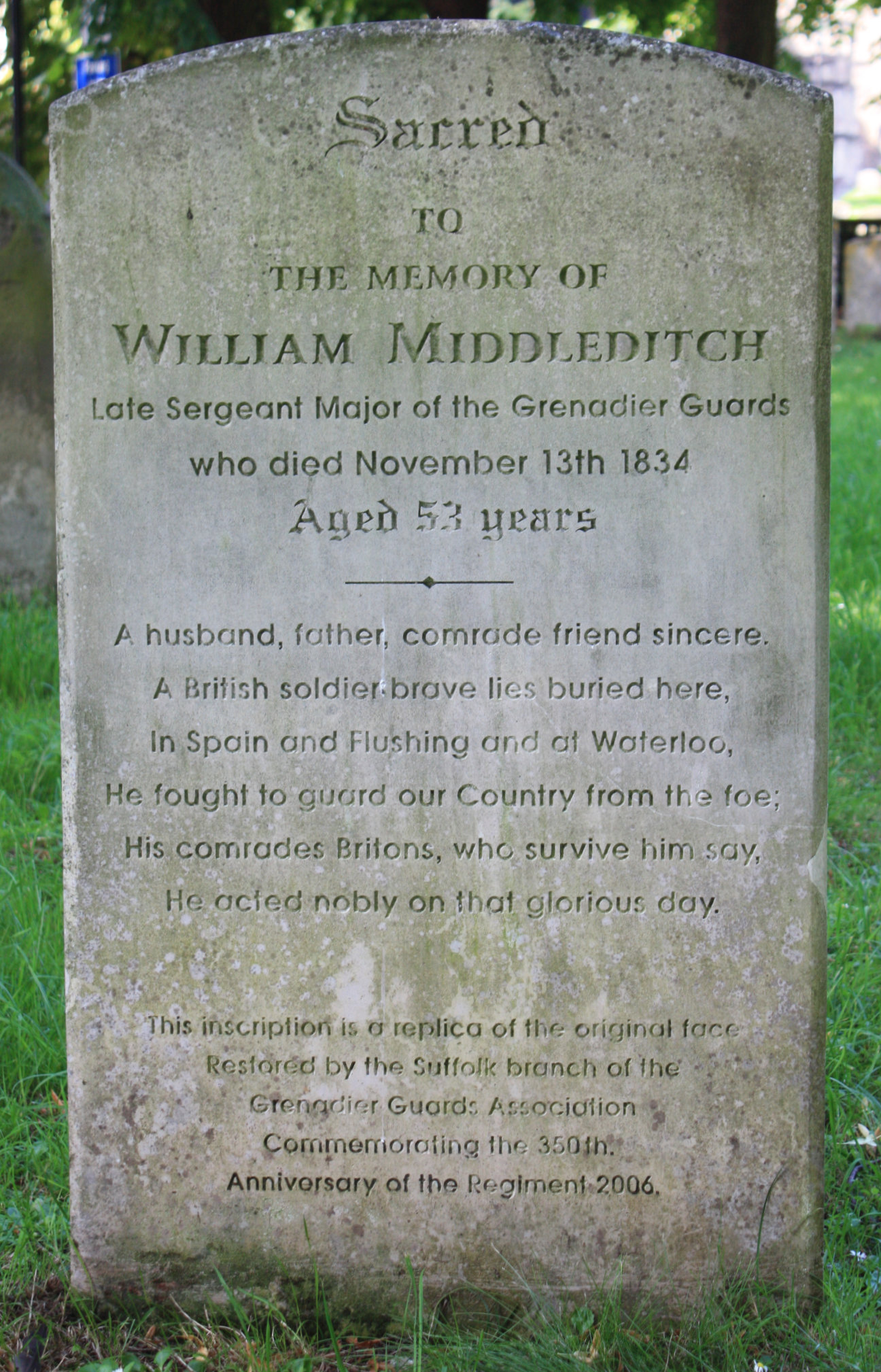 William Middleditch was a Sergeant Major in the Grenadier Guards. He served in Spain, Flushing and at Waterloo. 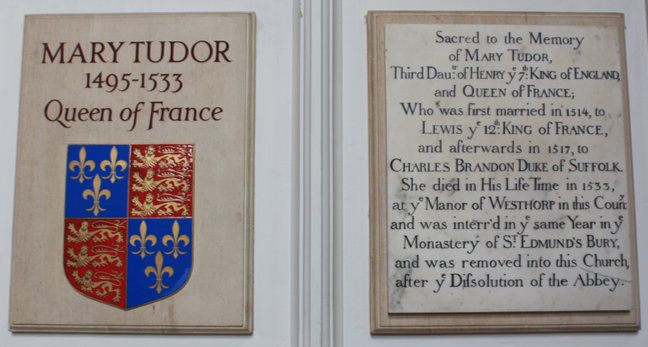 Mary Tudor (18 March 1496 – 25 June 1533) was an English princess who was briefly queen of France and later progenitor of a family which claimed the English throne. The younger surviving daughter of Henry VII of England and Elizabeth of York, Mary became the third wife of Louis XII of France, more than 30 years her senior. Following his death, she married Charles Brandon, 1st Duke of Suffolk. 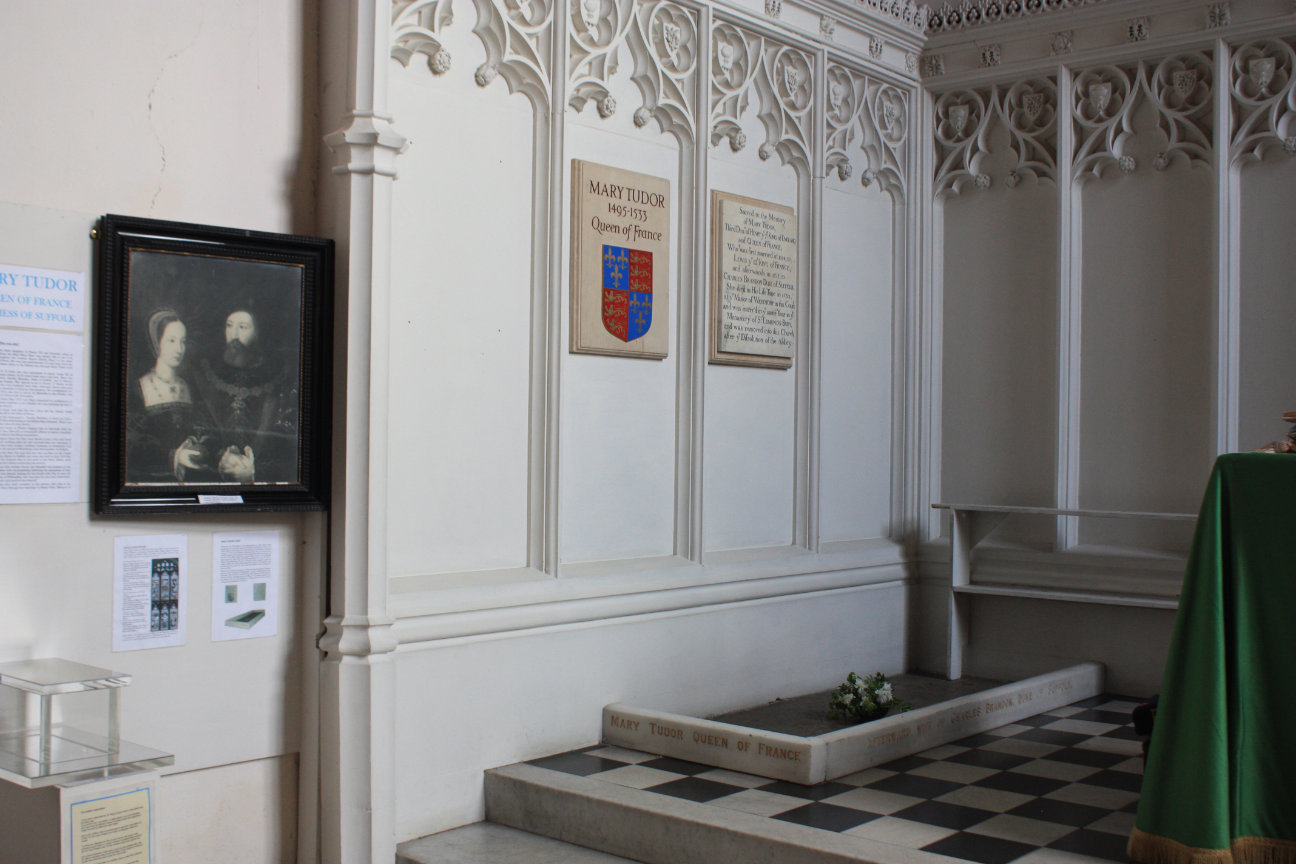 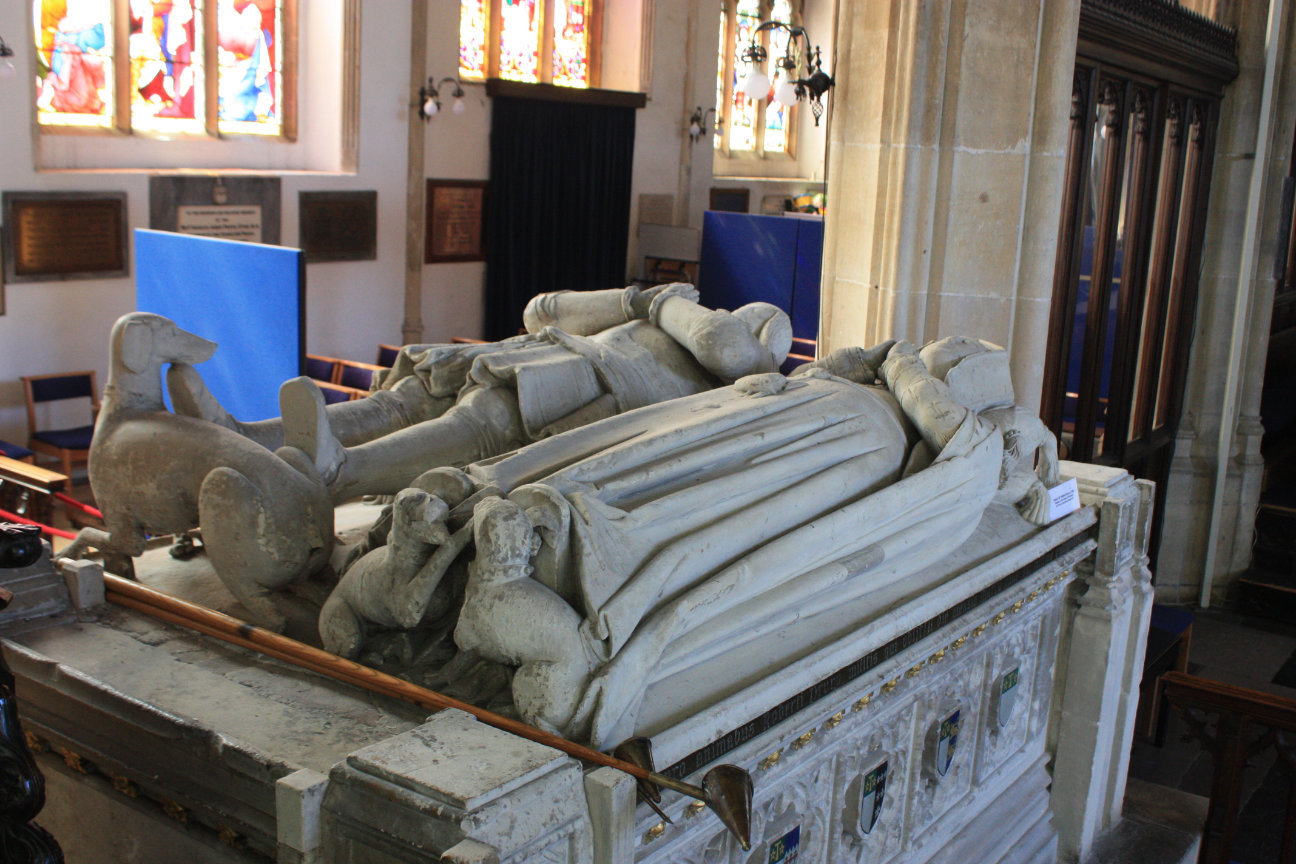 East of the screen are two grand memorials, both topped by couples. To the south are the Drurys. 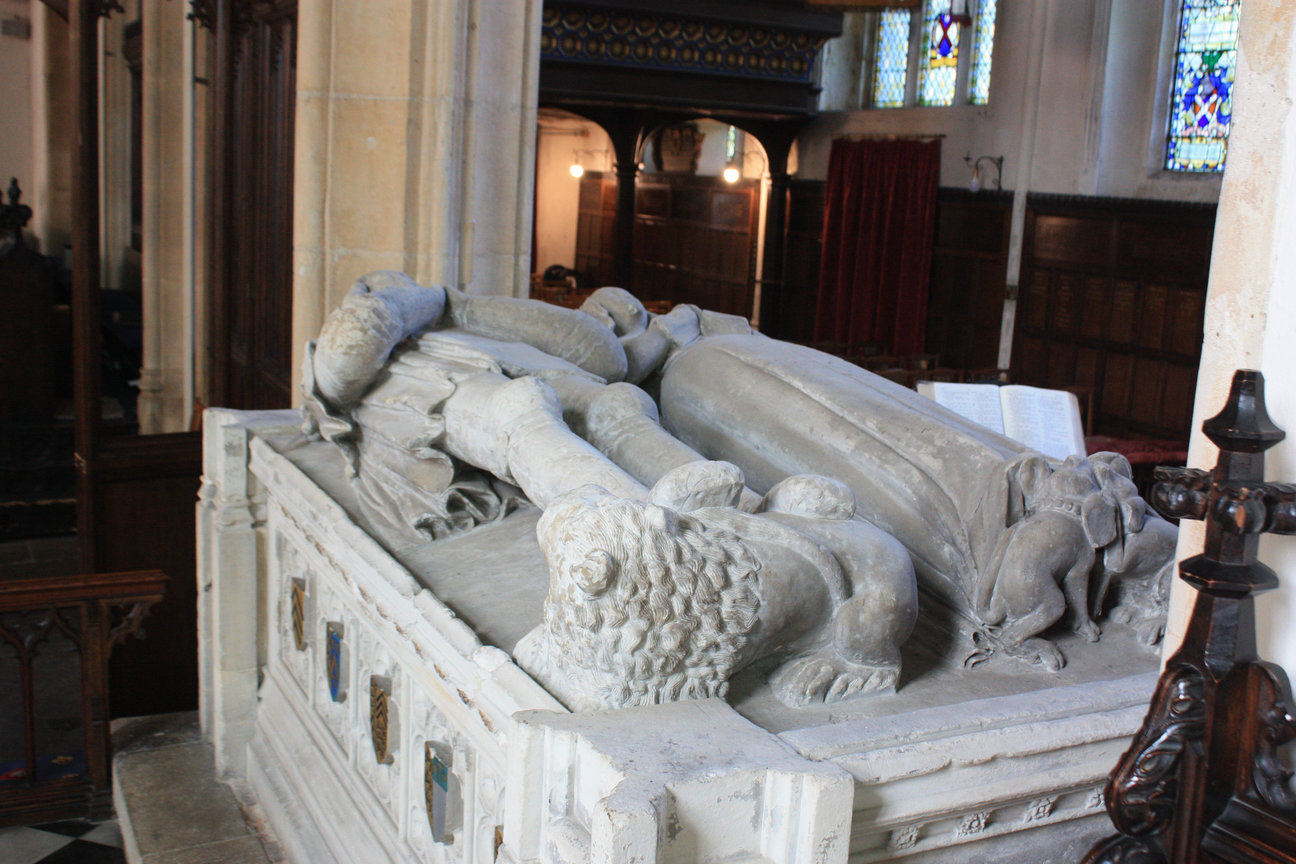 To the north are the Carewes. 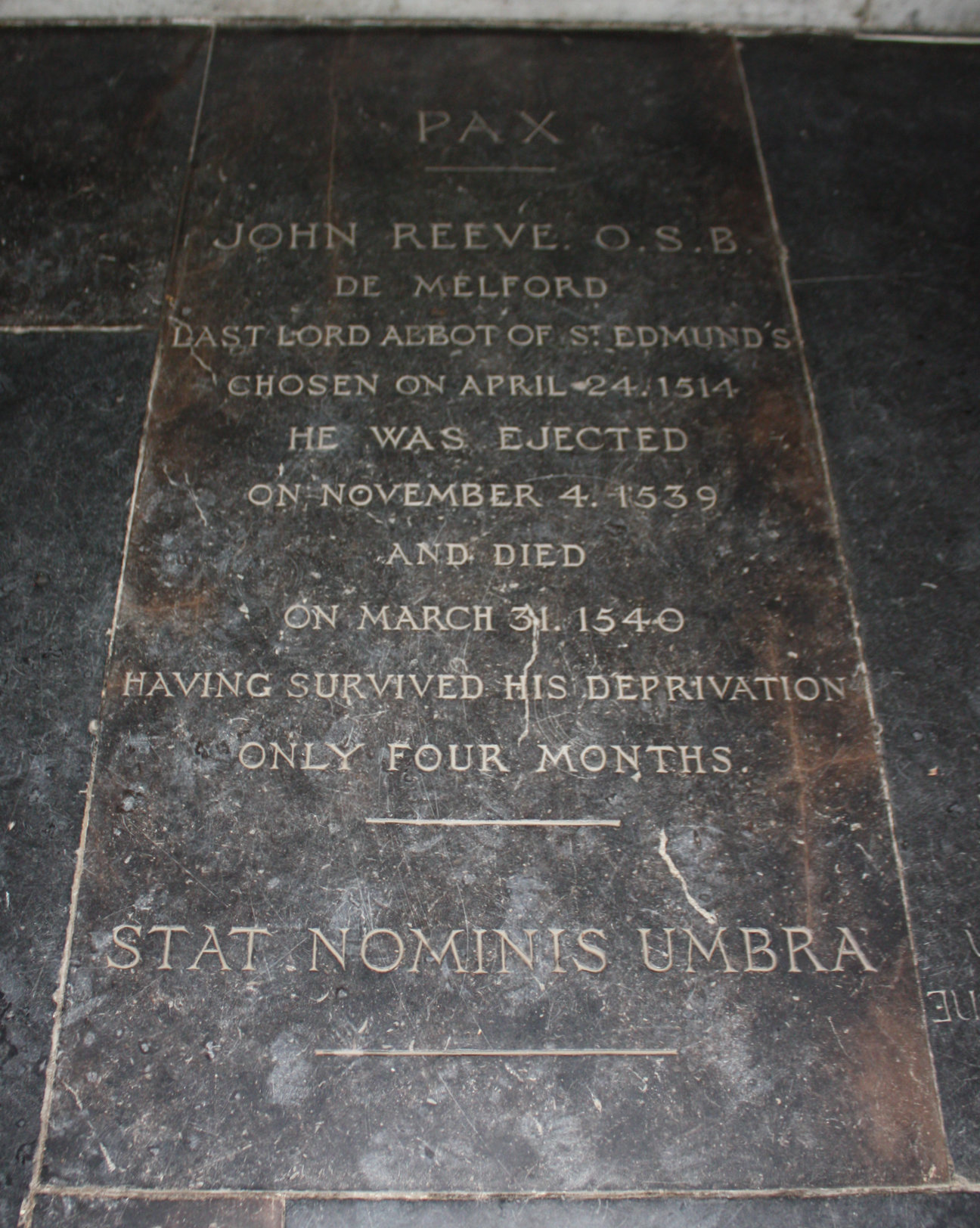 Prior to the Dissolution of the Monasteries the Abbot of the Abbey of St Edmund upheld the King's law and imposed, and collected, taxes in the whole of the area later to become West Suffolk. The Abbot also sat as a peer in Parliament. The last abbot, John Reeve, was given a pension, and may have lived his remaining days in this house in Crown Street. He died within a few months of the surrender of the abbey, and may never have received his generous pension of £333. 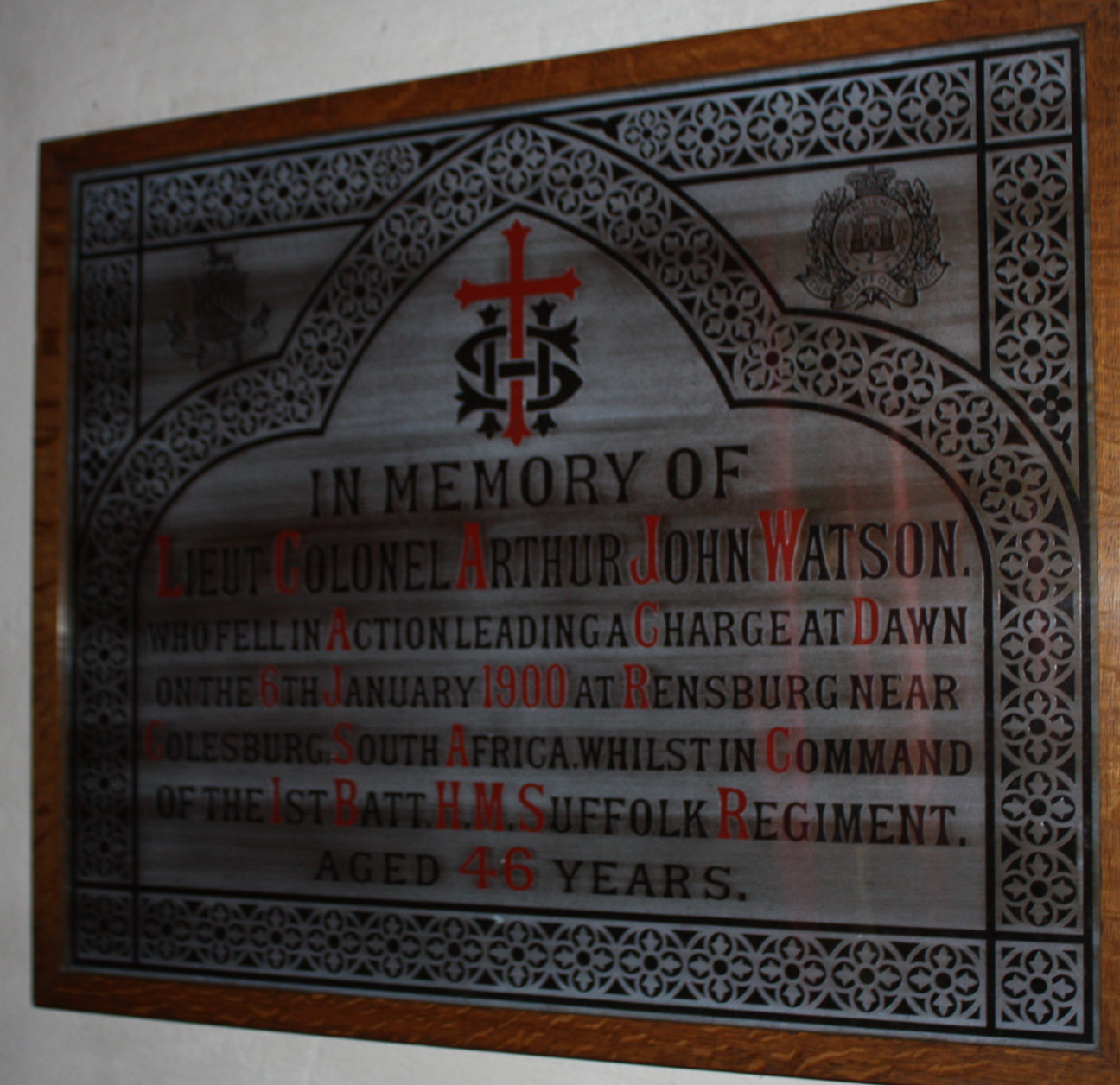 Arthur Watson "fell in action leading a charge at dawn". 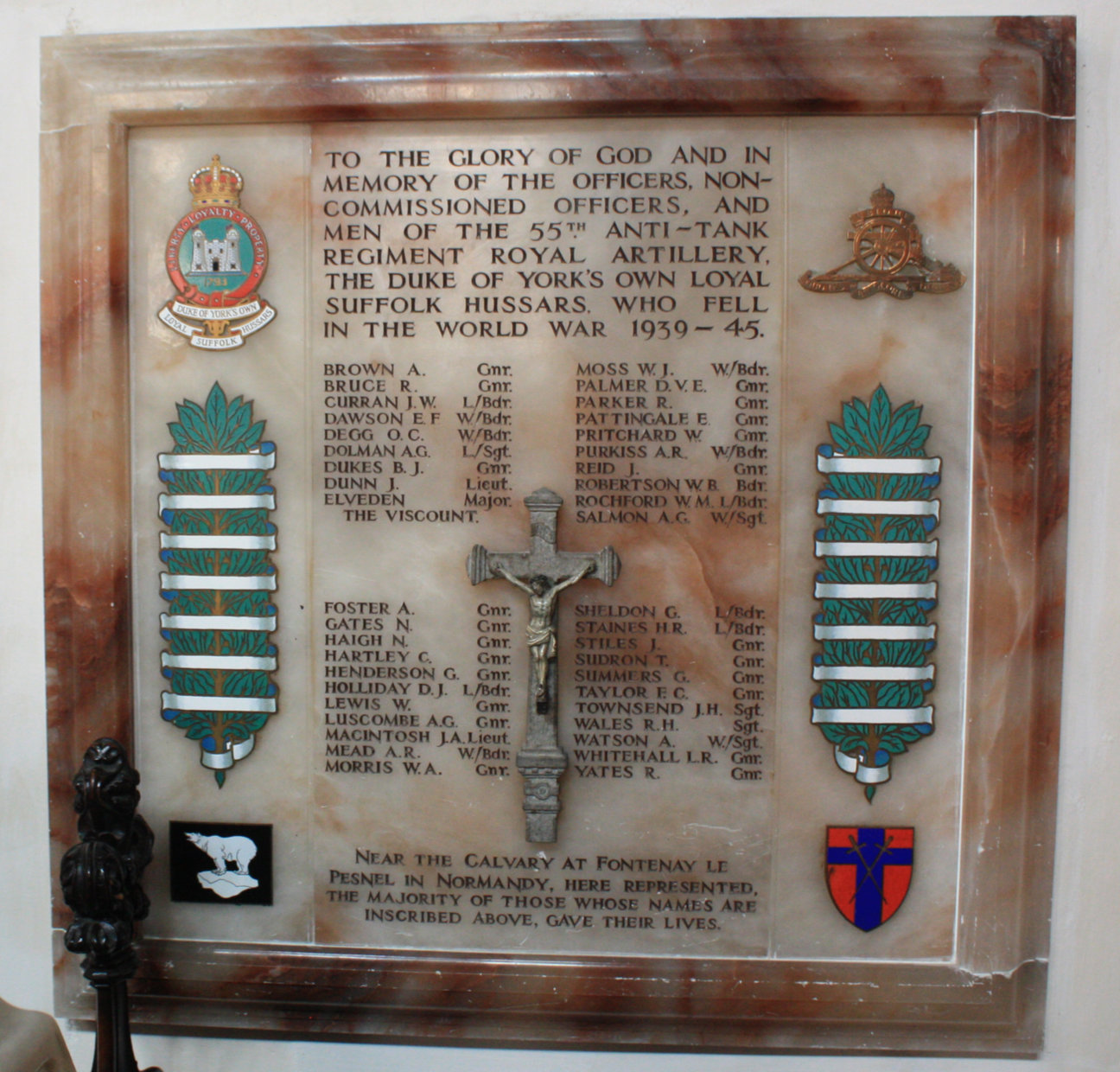 The elaborate and colourful war memorial to members of the 55th Anti-Tank Regiment Royal Artillery. 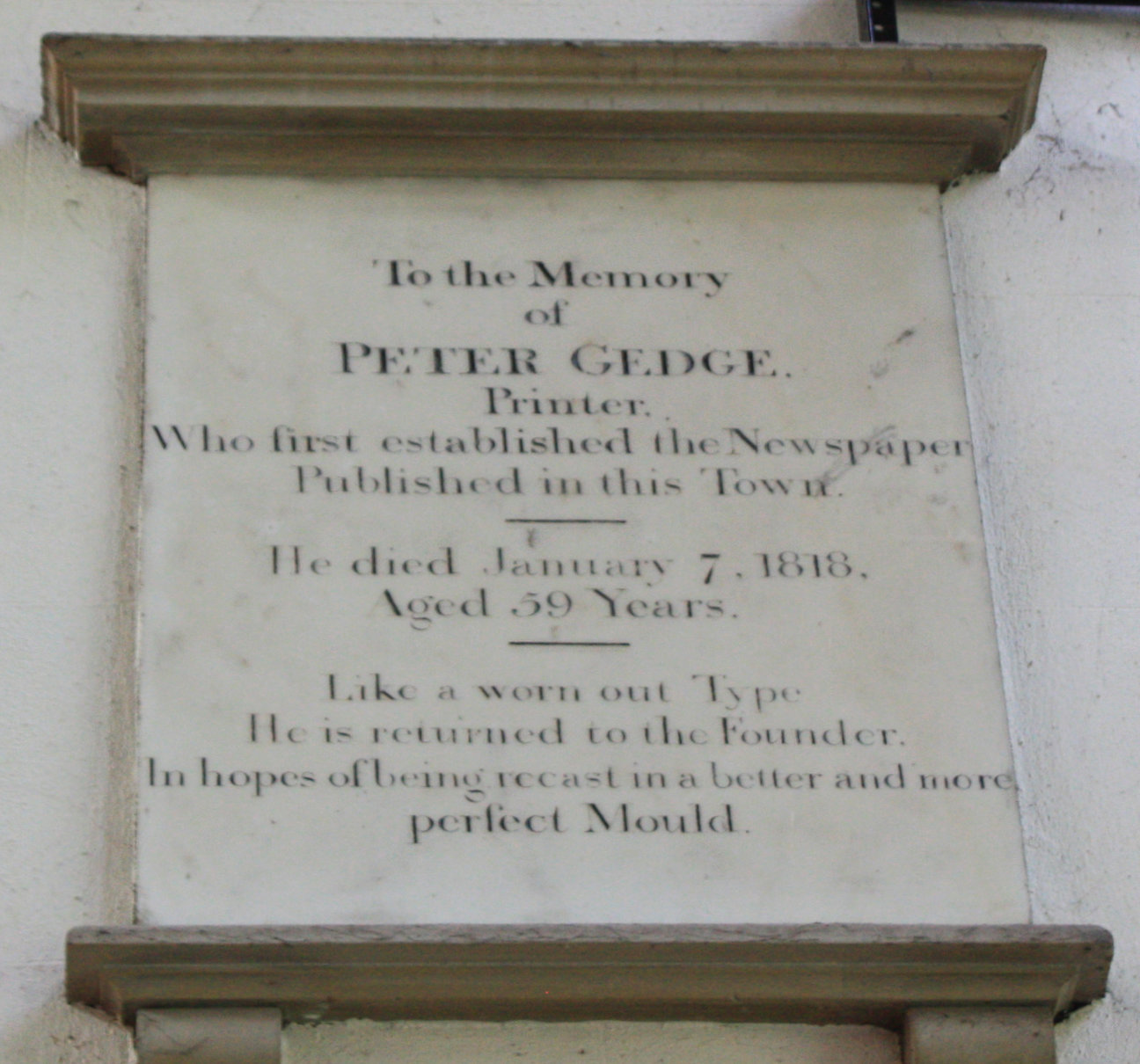 Like a worn out Type - He is returned to the Founder - In hopes of being recast in a better and more - perfect Mould. 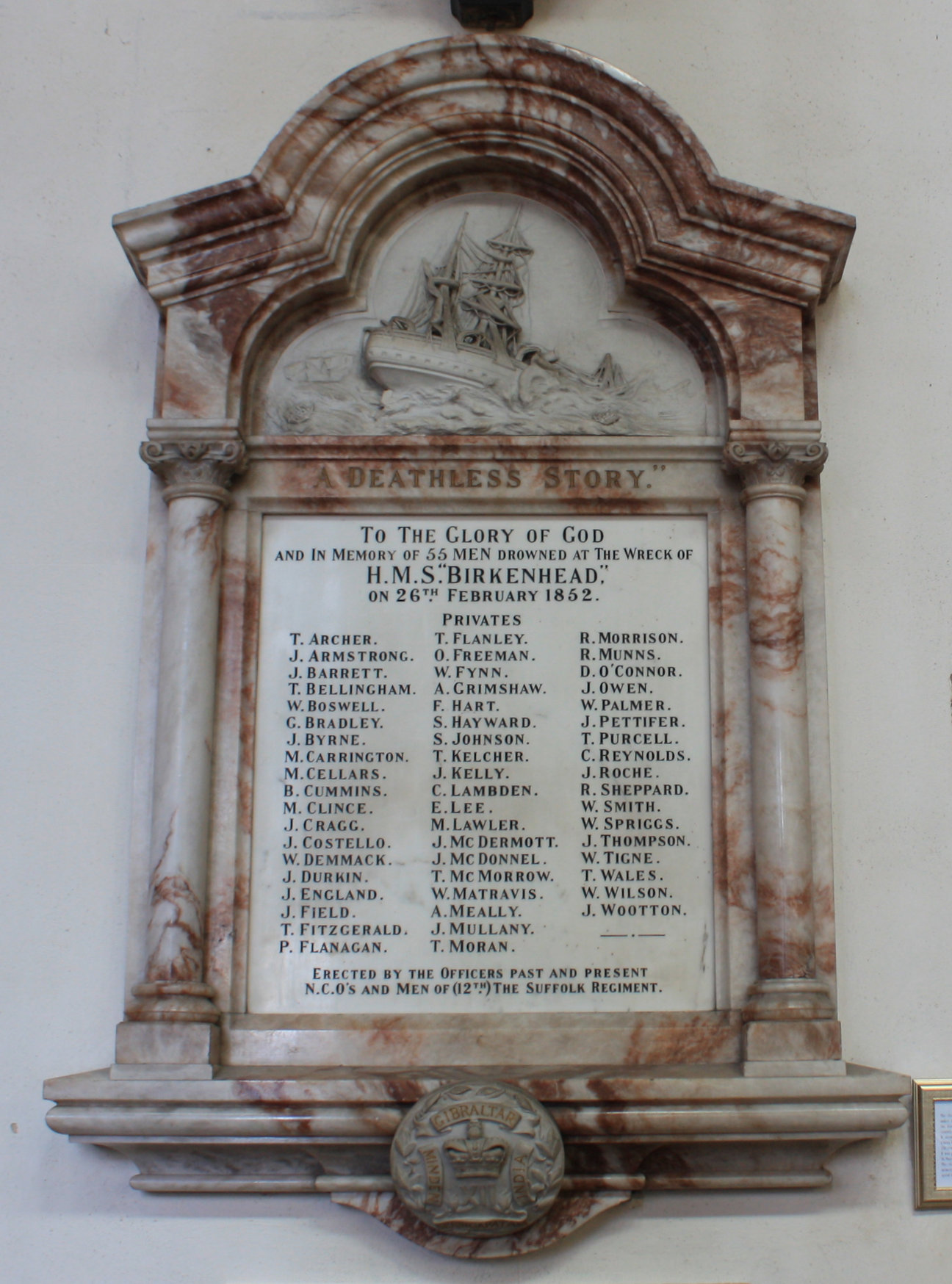 The memorial to the shipwreck of the Birkenhead - the origin of the "Birkenhead Drill". Only 193 of the estimated 643 people on board survived, and the soldiers' chivalry gave rise to the unofficial "women and children first" protocol when abandoning ship, while the "Birkenhead drill" of Rudyard Kipling's poem came to describe courage in face of hopeless circumstances. 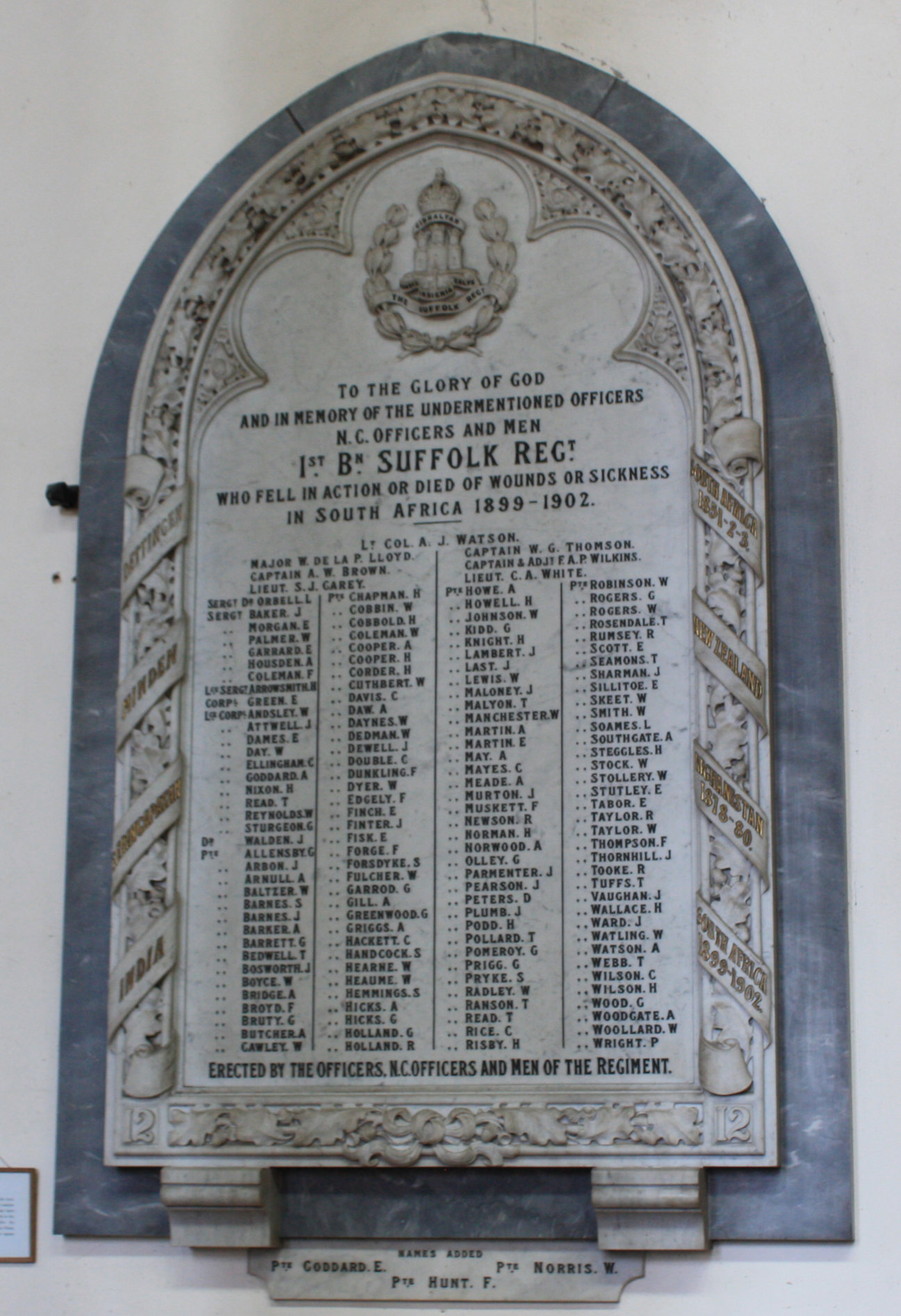 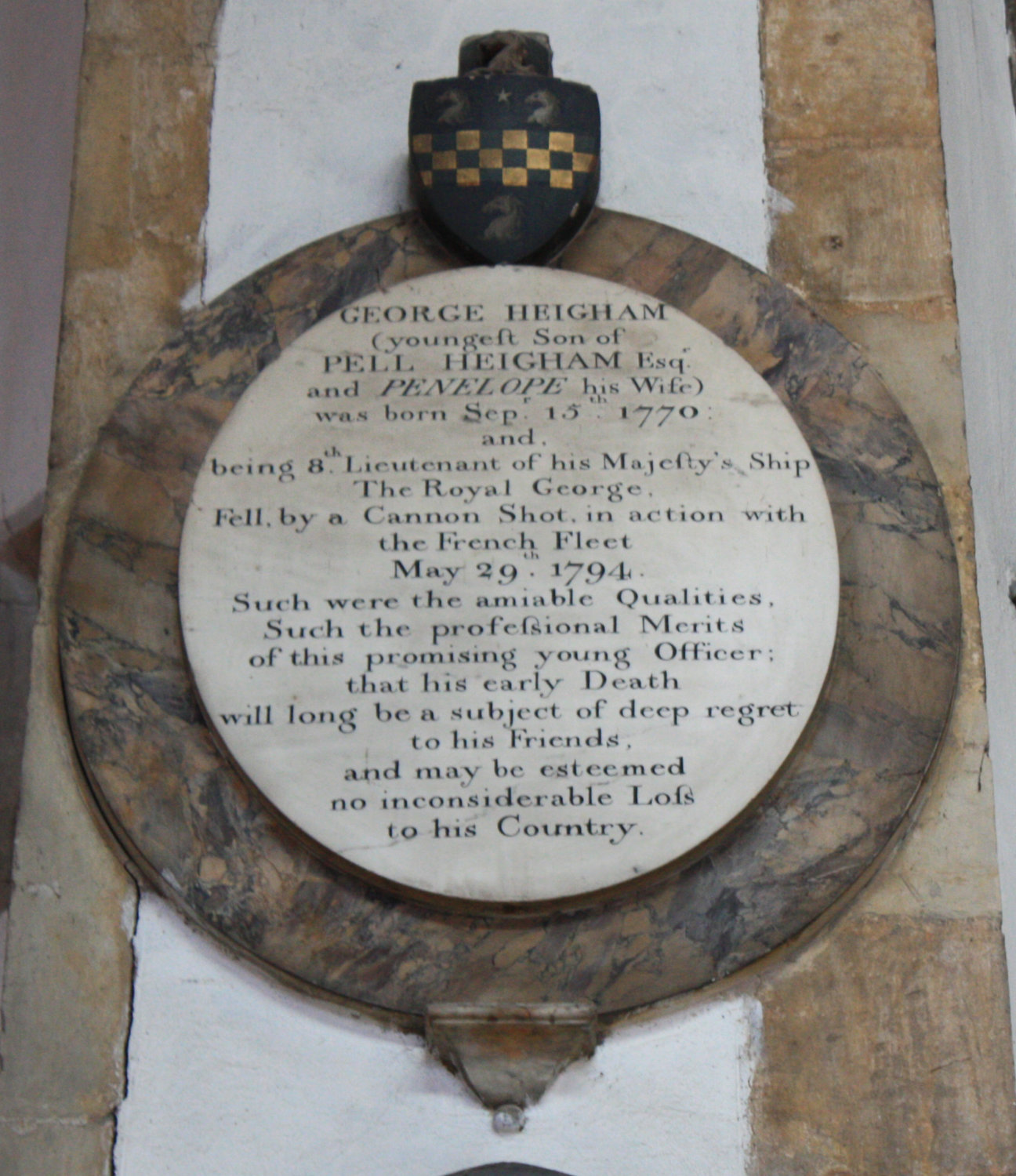 George "Fell by a Cannon Shot , in action with the French Fleet" in May 1794. 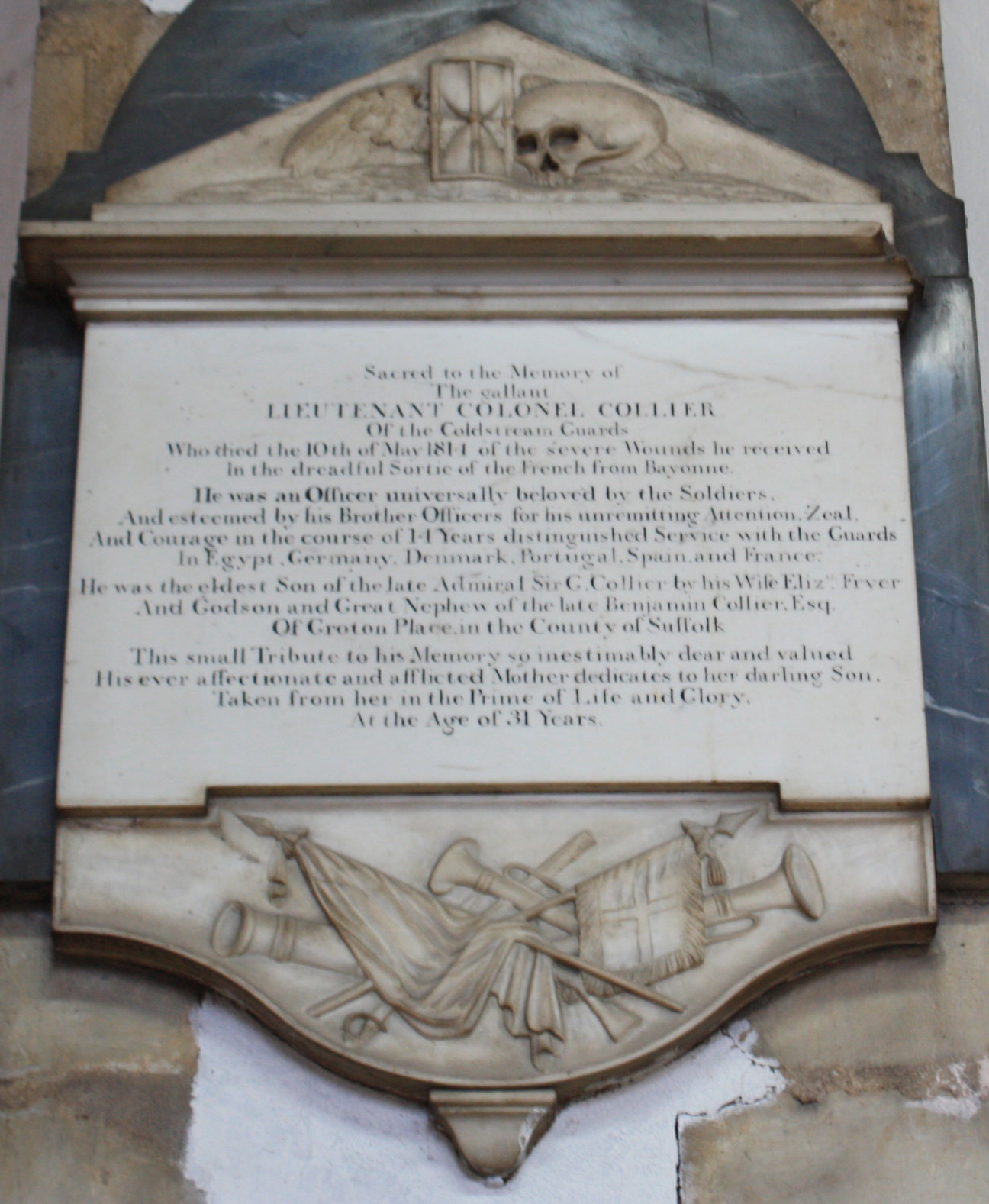 ".. severe wounds he received in the dreadful Sortie of the French from Bayonne." 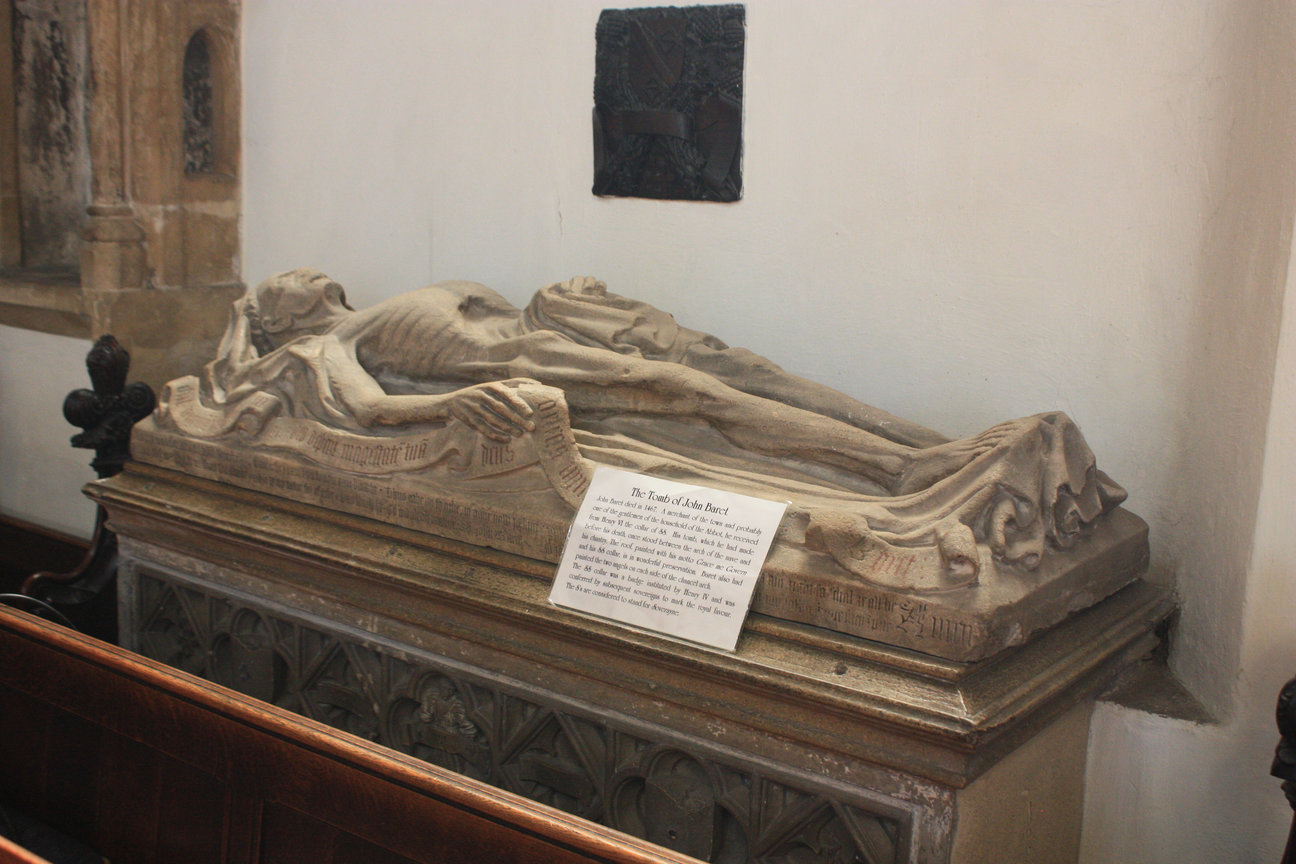 The cadaver tomb of John Baret showing him as a corpse, drawn and withered. Baret died in 1467, leaving a wonderfully detailed will. A wealthy and well connected cloth merchant, he lived in Chequer Square. John Baret's marriage was childless and evidently unhappy. By the time he wrote his will in 1463, he and his wife would seem to have lived apart; Elizabeth receives just a single mention of one sentence, 11 pages into the 30 page document, in which he bequeathes her only a ring. 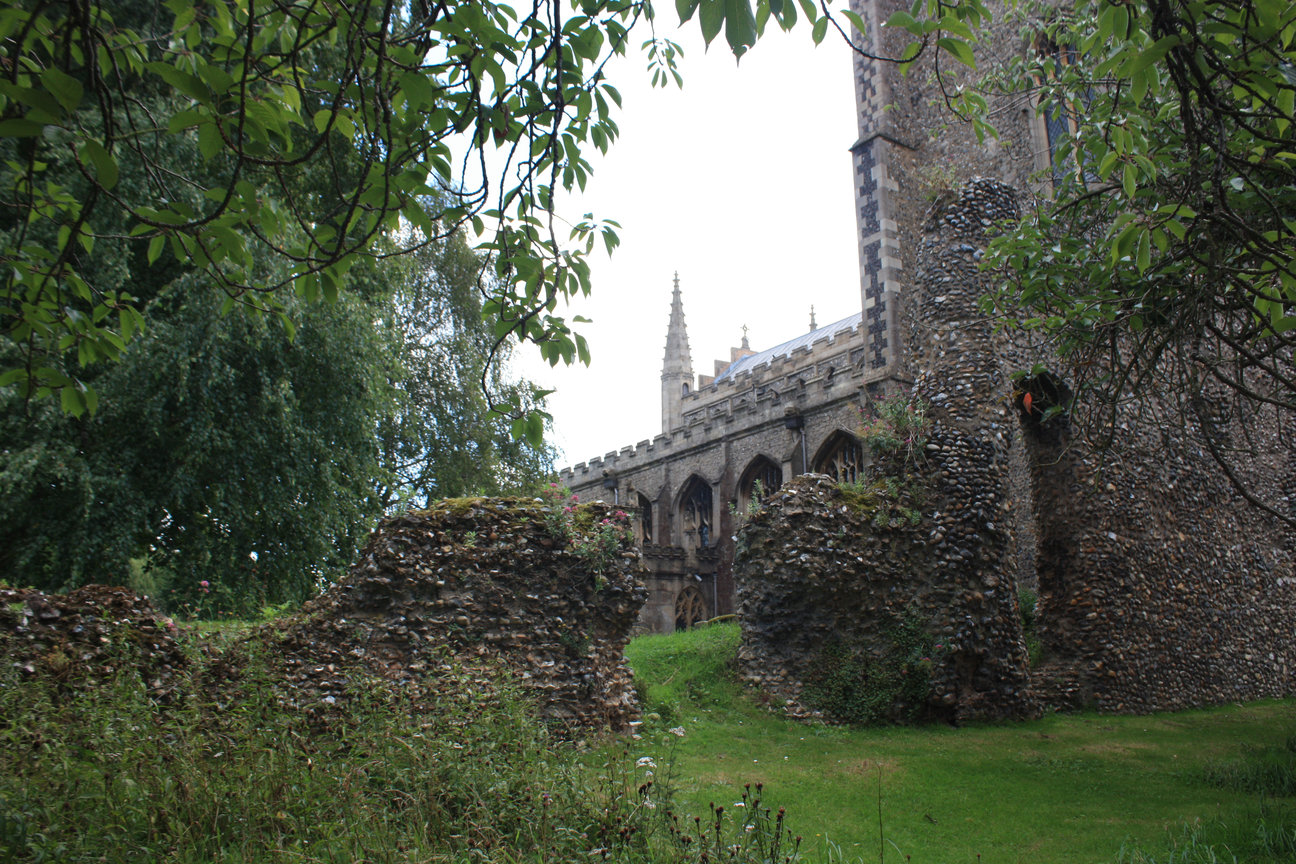